Follow my journey as I serve as a pilot with Mission Aviation Fellowship. I am currently working in Timor-Leste.

Suai lies on the south coast, relatively close to the land border with Indonesia. It's 30 minutes' flight time from Dili. The direct track passes over Gleno, past the flanks of Mount Ramelau, and through the Bobonaro gap. As far as scenery goes, it's one of my favourite routes (when the gap is not full of cloud...)

Runway directions: 17/35
Length: 1500 m
Altitude: 100 ft
Surface: Sealed
Slope: 1.6% down to south
Obstructions: Rising terrain to the north. Unable to see other end of runway due to hump in the middle.

Same (pronounched SAH-may) is nestled on the south side of the main mountain range. Although you can land in both directions, take-offs are restricted to the south only due to high terrain all around. I haven't flown there very much, but in the last couple of weeks we had two medevacs there, so I managed to grab some pictures.

Runway directions: 18/36
Length: 820 m
Altitude: 1100 ft
Surface: Grass, gravel base
Slope: 2% down to south
Obstructions: Rising terrain to the north and west. Take-off runway 36 not permitted. Animals and people frequently on the airstrip.

Last weekend Catharina and I joined a group of riders on an overnight cycling trip to the village of Letefoho. I've flown past it many times as it lies close to the track we take to get to Suai, so I was interested to see what it was like to get there by ground - and under our own steam!

Last night I left work about an hour and a half later than usual, around 6:30. It felt even later than that because by the time I got home it was pretty much dark. We had a late medevac call to Suai, on the south coast, and my first proper experience of negotiating tropical weather there and back had left me with quite a bit to think about. No problem though; I was home, and had the rest of the evening to muddle through the things that needed doing, one at a time.

Step 1: Carry two 20 L containers full of water into the house - a ritual I have been doing for about the last week, since the water pump developed a mind of its own. Each day I’ve taken the containers to work, filled them up there and then brought them home again. It’s been my way of taking back control over the situation where you open the tap only to find nothing comes out, then going to check the pump only to find it’s clogged up with something, probably sand and grit, yet again.

Step 2: Cook dinner. That morning I had put a couple of frozen chicken breasts in the fridge to defrost. They hadn’t. I looked at my watch; it was already 7:00. Can I really be bothered with this? Nah, just take the easy option - toaster oven on, chips and chicken nuggets in.

About ten minutes later there was a bang outside and the power went off. Thankfully I knew exactly where my headtorch was and was able to find it in the dark. How long should I wait for the power to come back on before turning on the generator? Well with food half-cooked in the oven, I can’t really afford to wait long. So on with the generator, which involved arming myself with my trusty mosquito zapper and venturing out into the darkness to find the shed by the back fence, generator on, then to the power box at the front of the house to switch the supply over.

Step 3: Iron shirts. Ten minutes to go on the oven timer. I really only needed one shirt, for the following day... the others could wait.

Step 4: Eat dinner and make a plan for the evening. I decided the best course of action would be to get ready for a shower straight after dinner, then turn the generator off, shower by torchlight, and go to bed. That way I wouldn’t have to go back outside in the diesel fumes, dust and humidity after my shower. But just as I was finishing dinner, the power came back on again - heralded by some gleeful shouts from the kids living next door. So I was able to do some Bible study instead before getting ready for bed.

Step 5: Have a shower. At present, due to the water pump issues, this is not as easy as ‘undress, turn on the tap, wash’. Instead it means scooping water from my container into my shower bucket, scooping more water into the jug to boil, mixing the two, carrying the bucket to the bathroom (along with extra water to manually refill the toilet cistern after using that). Then undressing and washing etc.

Just as I got out of the shower the power went out yet again. I didn’t have my headtorch with me, but I did have the mosquito zapper, which has a built in light. (I have got in the habit of taking the zapper into the bathroom as there always seems to be at least two or three mozzies in there.) So I was able to see what I was doing to get dressed and brush my teeth - using water from my drink bottle, which again I have got in the habit of taking into the bathroom with me for that purpose.

Step 6: Go to bed. Using the mosquito zapper light I was able to locate my headtorch. I remembered to switch off the lights in the bathroom and bedroom so that they wouldn’t turn on automatically when the power came back on, which it did sometime around 12:30 am.

All of these events are not all that unusual here, but what I did find unusual was how calm I felt through it all. The last few weeks I have had some mini-meltdowns about the water pump, but I think now that I have backup systems in places (i.e. water containers and generator) it has given me back at least a sense of having some control over things. It could also be that God has stretched me to a point that these things are not as painful as they once were. It gives me hope for the future that I might be able to adjust to life in a MAF programme long term.

On Monday I had a flight to Oecusse. Going down I was taking two directors and three staff of an NGO. Then I had to wait for about 2 hrs before the return leg to Dili, because I had been asked to fly the President of Oecusse and four of his staff to Dili for a meeting at parliament. Naturally there was quite the fanfare at both ends of the flight. At Oecusse I was presented with a traditional tais wrap, which was most unexpected.

The president was keen to sit in the front seat, so I let him. I found it mildly amusing that he kept nodding off on the way back. I took it as a compliment that my flying was smooth and he felt safe with me at the controls!

As we flew over Maubara I was able look down and see the house where Anton lived. He is the friend of Rob and Catharina whom we have visited a couple of times. His personal situation - health, finances, education, opportunities - was a million miles away from the man currently sitting (asleep) next to me. Yet he was just as precious in the eyes of God.

On arrival back in Dili we had to turn the plane around straightaway for a medevac at Viqueque. It was pretty bumpy coming back, thanks to the strong winds interacting with the mountains and thermals, so I was doing my best to fly smoothly. Was I trying just as hard as if the president of Oecusse was on board? I'd like to think that I was.

From one end of Timor to the other

Today was a relatively busy day - an 8:00 charter flight to Oecusse, followed by a 10:30 charter to Atauro Island, then a medevac flight from Los Palos. This meant that I literally flew from one end of the country to the other today!

In other news, when I got home today there was 600 kg of semen inside the front gate. 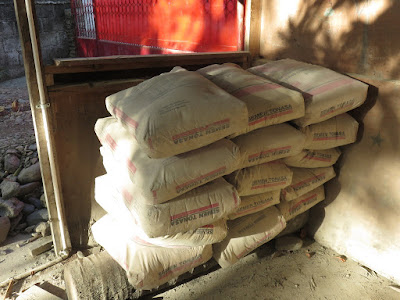 The landlord is rebuilding a wall at the house...

Events this week - including a bike race! 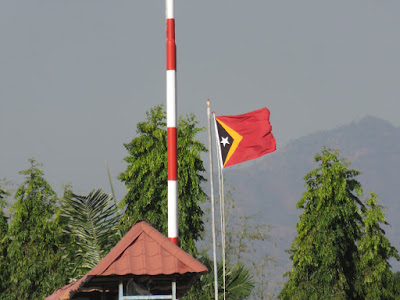 It's been a busy week this week!
On Monday we did an oil change (which took about 2.5 hrs) and then three medevac flights back-to-back.
On Tuesday another three medevac flights.
On Wednesday we were called to a medevac at Maliana, which I attempted but was unable to land due to the wind being too strong. By the time I got back to Dili it was pretty challenging there too. We had to decline a second medevac later in the day.
On Thursday it was still windy, so we had to cancel a charter flight in the morning, but I was able to do a flight in the afternoon.
On Friday I did two medevacs, which were bumpy but otherwise ok.

Then on Saturday I took part in the 'Referendo Cup' mountain bike race event. I took a shortcut and didn't do one of the massive hills - it was still pretty hard going. As one of the other cyclists said: "There are two types of fun - type 1 fun and type 2 fun. Type 1 fun is where it's fun while you're doing it. Type 2 fun is where it's horrible while you're doing it but afterwards you look back and say, 'Well that was fun.' Cycling in Timor is very much type 2 fun."

Here are some pictures.